I'm moving my blog away from LJ.  Here's the new one, if you're interested.  Don't expect the new one to update any more frequently than this one, though!

I had heard many good things about Perdido Street Station, so I bought it and started reading it a while ago.  It took me quite a long time to get into it, because for the first quarter to third of the book, there is not much plot.  Instead, there are descriptions of how disgusting everything is in this world, and how horrible most people are.  Everything is foul and foetid and decaying and covered in slime and shit and pus.  There is nothing and nowhere that is just normal.  This started to make me feel that the book was just obnoxiously pretentious.  (Use the word "foetid" once in a book, okay, that's a word - and spelling - I don't see too often.  Twice, wow, things are pretty gross, huh?  Three times, now you're just annoying me.  This book uses it 7 times, or so the Kindle tells me.)

When things finally did pick up, it got pretty good.  The world is interesting, the characters are well written, and the plot did get exciting.  But there kept being these pages (or, rather, screens, since I was reading it on the Kindle) of nothing but disgusting descriptions again, and the feelings of pretentiousness continued.  I started to just skip those sections entirely.

After finishing the book, I was left a little bit confused about the point of the whole thing.  Most of the plot was about one thing, but the wrap-up made it seem like the point was about something else entirely.  I just didn't get it.

I was left feeling similar to how I sometimes feel about Apple products: there's something very good in there, but it's wrapped in so much pompousness that it just leaves me with a bad taste, and even though I should like it, it just makes me grumpy.  I think I would still recommend it to others, though.  After all, there was good stuff in there, and everyone else I know who has read it, likes it.  So there must have been something about my state of mind that didn't allow me to enjoy it.  But I imagine others would.

I love my life right now.

I love that I'm not so busy right now.  I'm 99% done with my job at LC.  Technically my last day was Thursday, but I'll be going in to help out a couple more times, since they didn't manage to get someone hired before I left.  So I'll help keep things running and then help train the new person.  I really loved working there (as witnessed by the fact that I've worked there, in one form or another, since I was 18) - but it was definitely high time for me to move on to something a bit more in my field.

And I love my new job.  I'm doing some web development stuff - the sort of thing I'd taught myself a bit of here and there, but wouldn't call myself competent in.  But now I'm actually working with it, and I'm learning fast!  And I'm enjoying every minute of it.

I love the fact that I'm not going to have to drive to school/work.  And I love that school/work are in the same place!  I get to commute less AND I get to read instead of be stressed out by traffic!

I wouldn't quite say that I love getting up early to exercise, but I love that I am managing to do it most days.  Running is fun again.  I love the fact that I've managed to stay in pretty good shape for almost a year now.  I'm pretty sure that I'm going to try to train for a half marathon in April.

I love that I am getting paid to go to school now.  I freely admit that I might not have gotten my scholarships if I wasn't a female in computer science, but I certainly have the GPA to back it up, and I'm really proud of those scholarships.

And I love that I actually get to see my husband (that still sounds weird!) more often.  He's working a bit less, and I'm working less.  We actually watched a whole season of BSG together!  (Not all at once.)

Only downside: Katy, why did you have to move to Santa Fe?  I miss you.

Anyway, things are going great for now.  Life has its ups and downs, so I'm going to enjoy this up while it lasts!

Out of nowhere, I got a new job.  It's at PSU and it actually involves computers.  I had to decide if I wanted it really quickly - like, within a couple of hours - because I'm about to leave on a road trip and the job starts on Monday.

So I put in my two weeks notice at LC.  I've worked in the Grad School for 8 years, and (other than three months at Target when I was 18) I have never worked anywhere else.  It's pretty scary!  And, since the new job starts Monday, I get to do both jobs for two weeks, plus go to a full schedule of classes  They're both very part-time jobs, but it will still be pretty tricky to work out the schedules.

I'm really going to miss LC.  It's my second home.  And I'm not leaving at the best time (someone else in my office just left last week!) but I couldn't give up an opportunity to actually get some experience related to my field.  And, icing on the cake, it majorly improves my commute.

Wow.  I'm really going.  It's so weird.  It was a strange day of telling people I've worked with since I was 18 that I'm leaving.

Of the 5 races I've done, 3 of them have been on the 13th of the month.  The last three, specifically.  Interesting coincidence.

I did the Pints to Pasta 10K on Sunday, and set a new PR: 56:58.  That is excellent for me, especially since I wasn't feeling like I was in great shape and I sort of injured my feet the night before.  Of course, I've been reading too many articles in Runners World about professional runners who talk about running at an easy, conversational pace of 7 minutes per mile, when I can't even do a 5 or 10K at 9 minutes per mile.  I just have to remind myself that I am continually improving and beating my own time.  I'm doing this for fitness and fun, after all, not competition.

This was also the last run with my first real pair of running shoes.  I've run 677 miles since I got them, and while some of those miles were with a different pair of shoes, I've still run well over 500 miles on this pair, and they were starting to wear out and not be as supportive.  So I bought myself a new pair, and this 10K was my old pair's final hurrah.  You served me well!

I gained a lot of weight in 2007-2008.  A year ago I joined Weight Watchers online.  This week I quit my subscription, although I intend to follow the program on my own.  I lost about 35 pounds and 2-3 pants sizes; I've been at my goal weight for a couple of months.  C has lost almost as much weight, and he's been doing it with me since the beginning.  It would have been SO hard without him doing it too!

Here's a before and after picture.  Before is wedding dress shopping in August 2008 - my first week of WW.  After is getting laced into my dress on my wedding day - July 25th, 2009. 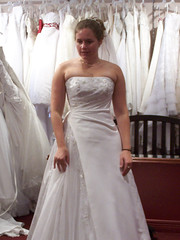 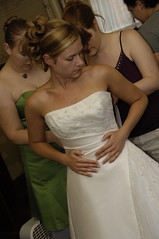 Of course, the after picture has the benefit of better lighting, hair, makeup, nails, and an actual tan.  But even so, I'm very happy with my results, and I intend to keep it up.  Even if it means that I will soon be working out almost exclusively in the mornings before work.  <shudder>

I'm writing a thank you letter for the scholarship I got, and they suggested that I include my extra curricular interests in it.  So far I have reading, running, and gaming...and that's it.  And gaming is kind of a stretch, since I don't do it a whole lot any more.  And I don't think "cleaning, organizing, and writing thank you notes" really count as interests, but that's what I do now.  I am so boring!  There's plenty of other things that I wish I had time to add to the list, but it's just not happening.  Do we ever get free time again, or is that just a myth?  Am I stuck being this busy forever?

I got another scholarship!  This means that they are now going to pay me to go to school, instead of vice versa.  Yay!!!

Then, a few hours after I got that letter, I ran in a 5K race.  I wasn't expecting to do well, since I didn't do a lot of running over the last month.  But I beat my old time by a couple of minutes to set a new personal record: 28:09, which makes for a pace of 9:04 minutes per mile.  Hooray!  Most "real" runners might consider that to be a very slow pace, but it's great for me, and I'm happy that I'm continuing to improve.

In this particular instance, they did great!  I discovered soon after opening my Kindle that it had issues in the sun - basically, you couldn't turn a page or call up a menu if the screen is in the sun without the text becoming very, very light and blurry.  I e-mailed them about it, and they told me to contact them by phone.  I decided to wait until the end of the honeymoon to bother with it.  Monday at about 3:00 I had them call me.  I was talking to a representative within about 5 minutes.  Within 10 minutes we were finished, and at noon the next day my new Kindle had arrived.  I have to return my old one within 30 days, with a shipping label they e-mailed me.  And my new one can be read in the sun.  Good job, Amazon!

Now if they will just not take back books that I buy from them, I'll be truly happy with it.